New Zealand startup YieldTec wants to introduce robots to fruit picking. Growers should be able to end seasonal labour shortages and save up to 60 per cent on costs with its technology. Some big growers like Seeka and Craigmore in New Zealand are very interested.

The technology will automate harvest management and logistics. YieldTec’s plan uses smart fruit bags that send an automated message to mobile bin robots when they are full. The system uses IoT connectivity and a technology platform to monitor fruit levels.

The mobile bin robot will automatically move to the location of the picker when the ‘full’ message is sent. The picker can then empty his bag into the robot’s bin. After that the mobile bin robot transports the fruit to the preferred destination for sorting or packing.

YieldTec founder Khalid Salah says his PhD research in agricultural robotics gave him the idea for the new robotic system. “Agricultural labour shortage is a global issue”, he explains. “And agriculture is the number one export industry in New Zealand. We therefore explored the use of multiple robots to automate yield logistics in orchards.” 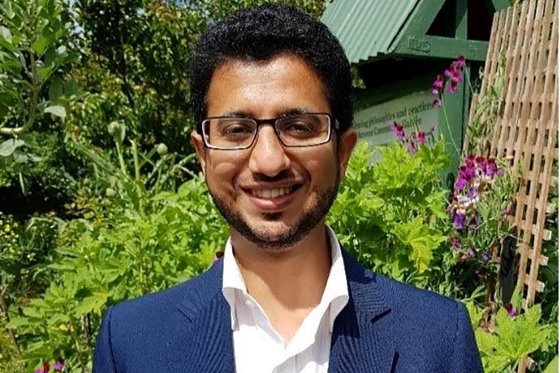 YieldTec founder Khalid Salah: “We found that there are some tasks that can be automated to minimise the dependency on labour.” – Photo YieldTec

Mr Salah first looked into the automation of fruit picking. “That proved to be very difficult”, he says. “In the last 70 years there have been hundreds of prototypes and all of them have failed to perform. My research showed that humans are still essential in the picking process. But we also found that there are some tasks that can be automated to minimise the dependency on labour.”

YieldTec’s is to automate the transport of yield to the sorting station. “Because that part of the process takes up a lot of time and causes fatigue”, Mr Salah says. “Then we need less pickers. And the pickers don’t have to do that much legwork, which will make them more productive.” 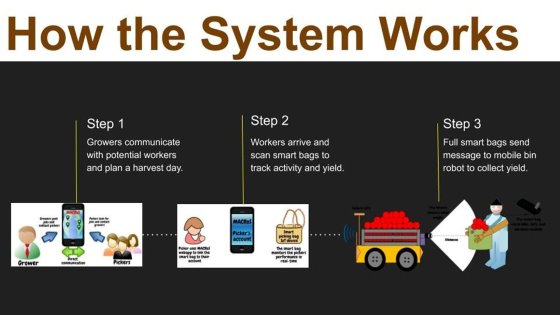 The Yield Tec System as it is planned to work. – Infographic: YieldTec

The technology will be able to do yield mapping. “That way the grower will know how much fruit every tree, block or orchard produces”, says Mr Salah. “Our platform will also deliver growers a history of the performance of pickers and farm. That will make it easier to plan for next season.”

Mr Salah points out there is a widespread shortage of fruit pickers in New Zealand. “Every year the government issues 16,000 short term work visas for seasonal workers to work in kiwis, cherries, grapes and vegetables. And still there is an average shortage of 5,000 pickers every season in New Zealand.”

“Growers will save on supervisors. Their work will be automated. Growers also don’t need tractor drivers anymore”

Mr Salah expects the technology can save growers up to 60 per cent on their harvest costs. “Growers will save on supervisors. Their work will be automated. Growers also don’t need tractor drivers anymore. Based on my research simulation, the productivity of the pickers will increase by 20 per cent.”

YieldTec is presently at the stage of market validation. The startup has produced a prototype, that will become a minimum viable product, to provide feedback for future product development. With this product the startup can attract investment. YieldTec works closely together with the Ministry of Awesome’s Te Ōhaka, a startup incubator at the Ara Institute of Canterbury in Christchurch which is funded by the Ministry of Primary Industry (MPI).

YieldTec is approaching medium and bigger size growers to attract interest in its technology. “We are getting a lot of interest already”, says Mr Salah. “Several companies, who deal with labour shortages, have reached out to us. Some big names are Seeka and Craigmore, who said they would like to cooperate with us.”

YieldTec wants to start testing the system as a minimum viable product in June this year. “That system will have a cloud based infrastructure”, Mr Salah explains. “We are looking to work with Seeka and Craigmore for this stage.” 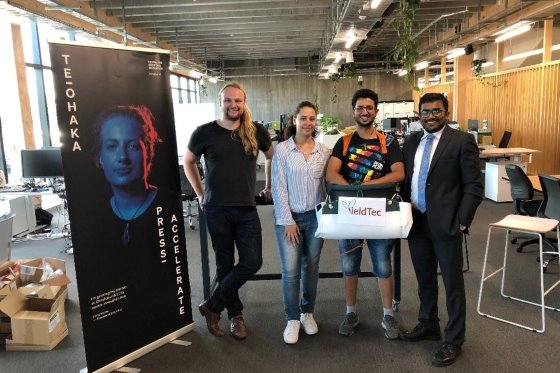 In the first stage YieldTec will test the technology with a big static fixed fruit bin. In the second stage YieldTec will use a fully autonomous fleet of mobile electric robots. “It will be a lightweight robot or mobile bin as we call it”, Mr Salah says. “They will weigh 100 to 200 kilogram and have the capability to carry up to 400 kilogram. Currently growers are using heavy tractors of 2 ton. They tend to cause soil compaction, carbon emissions and damage. Our system works with multiple lightweight vehicles. Software and an algorithm will make sure the waiting time for the pickers is minimal.”

The second stage with the mobile robot trial will start in October this year, Mr Salah expects. This trial will take six months. Eventually YieldTec wants to introduce a subscription fee for the complete system with infrastructure. Smartbags and robots can be bought or leased.